It’s the Once in a Lifetime, Ultimate thrill-ride that’s All Grown Up and Going to Hollywood… it’s Wrestlemania! 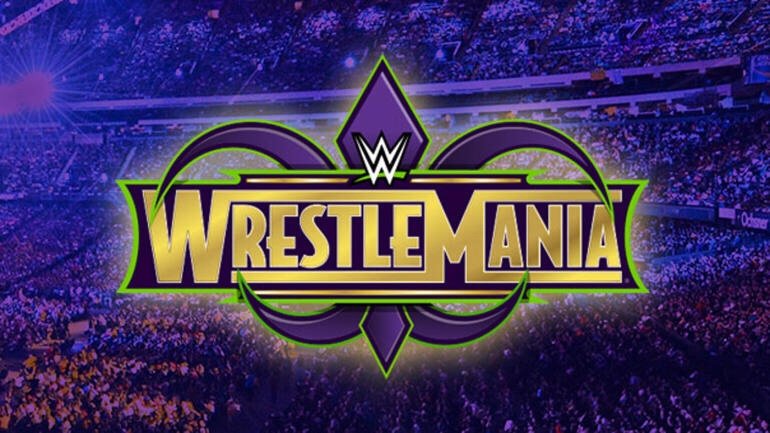 Bad tag-lines aside Wrestlemania remains to this day the most anticipated event in the wrestling calendar. Bringing in thousands of people from across the globe for a weekend full of wrestling, both mainstream and Indy. Even if the show itself fails to live up to the hype, it’s still almost always a weekend to remember.

So as we look forward to Wrestlemania 34, emanating from the Mercedes-Benz Superdome in New Orleans, we’ve decided to take a crack at predicting the lineup for what is likely to be a 7 hour extravaganza.

Before I begin though I want to let you in on a little behind the curtains thinking. As I was putting together the likely card for this year’s event, I reached the 12 matches total mark and realised that I still hadn’t jotted down the Raw Tag Titles being defended, a US title defence or a match for Kurt Angle. I know that Wrestlemania (Including the pre-show) is 7 hours long, but I genuinely don’t know where WWE are going to find the time to pay off everything that they’re setting up. Very few of the matches I had written down were ones which you could just cancel, postpone or have take place earlier.

But that won’t stop us! Let’s just assume that the first 3 matches are once again on the pre-show and that some of these matches run short and WWE manage to fit everything in.

I hate to put this match on the pre-show, but we all know which women the WWE are going to want to be focussing on by the time Wrestlemania rolls around. The seeds have been set for this match for seemingly years now, but the only real evidence that it might happen came at the Royal Rumble and this past week’s episode of Raw where Bayley defiantly claimed she could beat her best friend.

We know the two can put on a great match, as showcased by their time in NXT together, but due to being on the pre-show and due to this card likely being overflowing with matches, I doubt that they get anywhere near their NXT Brooklyn classic.

This Cruiserweight Championship tournament is the WWE’s chance to turn the division around. They’ve already started with the introduction of Drake Maverick (The former Rockstar Spud), and with the tournament already showcasing some high quality wrestling I would be surprised if this wasn’t the final match.

Expect some shenanigans from Maverick through which he places himself into the tournament at a late stage and goes on to face Hideo Itami in the finals at Wrestlemania (‘s pre-show).

Not much needs to be said about this match. It could be used to good effect, but it won’t be. Unfortunately I also expect to see the US champion take part in this match, whomever that may be by the time Wrestlemania rolls around, as well as the Raw Tag Team champions.

We kick off the main show with The Miz defending his Intercontinental Championship against the first ever Universal Champion, Finn Balor. Now usually I would cry that Finn is being drastically underused by the WWE, but it wouldn’t make any sense for him to be in a main event level feud now, given his year so far, so I think a mid card title match with the best heel in the company is a good shout.

With that being said, the fact that The Miz’s new reality TV series starts filming just prior to Mania, and the fact that his daughter is due to be born the day before doesn’t bode well for Balor’s chances of walking out with the strap.

This match feels like a pretty safe bet if Jason Jordan is fit to wrestle come Mania. If he isn’t then I wouldn’t be surprised to see him replaced with 1. Dean Ambrose (Again assuming that he is ready to go) or 2. Samoa Joe. All 3 matches would be very good and suitable for the Mania card, but it’s the Jason Jordan match I want to see the most.

Jordan’s character has been perfect for a number of months now and his work has been more than good enough to earn a match against one of the top guys on the biggest card of the year.

Most people expect Sami and Kevin to break up and face each other at Wrestlemania, I do not. WWE just did that angle with Kevin Owens last year when he went up against Chris Jericho, and doing the same storyline two years in a row is just a bit too much. More than that though I think there is still life in the pairing of Sami and Kevin. If they survive the triple threat at Fastlane then there is no reason to break them up.

The Smackdown tag division needs life breathing into it, and the introduction of Sami and Kevin as a pair going after the gold would not only make for golden television, but it would also likely make for a great match.

I do not think that Cena will be facing The Undertaker this year. I do believe that Taker is done for good and that if anything was going to happen with Cena it would have been set up at Raw 25 or at the very least the Royal Rumble. Any match that Cena takes part in that isn’t with either Elias or Finn Balor now feels forced, and with Finn already having his match against The Miz brewing away Elias is the only option left.

I don’t hate the match, but I don’t love it either. This will be John Cena vs. Rusev/Wyatt all over again.

If reports are correct and Ronda doesn’t end up being in a title match at Mania then 1. The WWE are stupid and 2. They will have no idea what to do with Charlotte. There is no natural rivalry there for Charlotte to transition into, and as much as I would love to see Becky vs Charlotte in a singles match, I fully expect WWE to shove as many women in here for a pay day as possible.

Also expect a Carmella cash-in after the match.

It pains me to put this match in any position other than the main event, but this is the WWE we’re on about and Roman is headlining this show. Expect these two to put an absolute classic match. Enough said.

Although it’s possible that Alexa won’t be holding the title by the time Wrestlemania comes around, I don’t think that will be the case. Her character is too good for her not to be brought down a peg or two on the Grandest Stage of them all. Having her lose in the Chamber, whilst perhaps allowing for a better wrestling match to take place at Mania between either Sasha or Bayley vs. Asuka is possible, it would be foolish.

Expect Alexa to keep hold of the title by nefarious means and for Asuka to win the belt at Mania.

Match 11: Braun and Ronda Rousey vs. HHH and Stephanie McMahon

I do not like this match. I do not like this match at all. Braun should be facing HHH in a singles match, but if WWE feel the need to put Ronda in this spotlight against HHH then the big monster makes the most sense to be her partner. Sure it gets Braun a “big fight feel” match, but he could have had that on his own. Let’s just hope that we actually get to see Ronda lay the Smackdown on Stephanie to make this all worth it.

It’s obvious why the WWE have spent a year building this match, the marketing speaks for itself. That doesn’t mean it’s going to appease the fans though. Giving us AJ vs Nakamura was almost certainly done to try and take some of the negativity away from Roman and Brock, and if I had to put money on it I will wager that it will do that to a lesser extent.

Roman no longer gets booed the way that he used to, and if we’re being honest he doesn’t deserve to be booed that much anymore. That, however, doesn’t make it any less annoying that he’s main eventing Wrestlemania for what feels like the 8th time in what is only his first decade in the big leagues.

We know that the two can put on a great match, but there’s no Seth Rollins there to save us this time, so let’s just hope that all involved have something up their sleeves to not let Wrestlemania 34 end on a sour note.

One thought on “Predicting the Wrestlemania 34 Card”