Following on from the internet breaking Avengers Infinity War trailer that dropped last week there has been a flurry of news regarding the film, and we’re here to round it up in one place 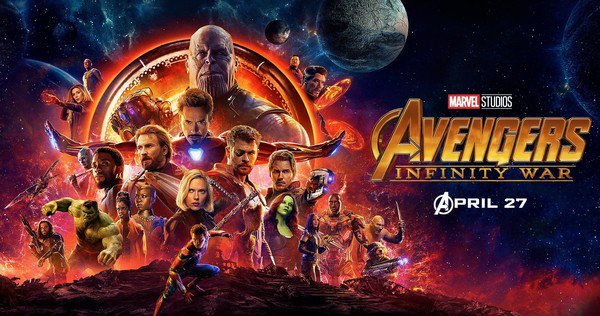 Following the release of the second trailer, tickets for the hotly anticipated culmination of the Marvel Cinematic Universe went on sale and immediately began breaking records.

Back in January it was reported by Fandango that Marvel smash-hit Black Panther had the biggest first day ticket sales of any Marvel movie yet, well that record didn’t last long as Variety have reported that Infinity War broke that record in just 6 hours.  That’s a huge achievement and would indicate that the 3rd Avengers film is on track to do incredibly well at the box office once it is released in late April.

Boldly going where no film has gone before

One of the biggest selling points of Infinity War is that it is bringing together the largest roster of Superheroes and characters that has ever been assembled (Pun intended) in a single movie.

With /Film reporting that there are 76 characters in Infinity War it is nothing short of a miracle that the film has been able to happen in the first place, and that’s something that Anthony Russo, one of the films directors, has been keen to point out.

Stating in an interview with Collider:
“I think it’s a very unique film, I don’t think there are a lot of movies that have the kind of tone that this movie has, because it’s a combination of franchises and I don’t think we’ve ever seen that before on this scale.”

It’s unsurprising that following the release of the trailer and poster a flurry of interviews with both cast members and the Russo brothers have been released. One particular tid bit of information that caught our eye throughout all these interviews was the revelation of which characters take up the most screen time in the movie.

The answer being the God of Thunder, Thor and the big bad of the film, Thanos.

In an interview with FandangoJoe Russo responded to a question about who has the most screen time by saying:
“Interestingly enough, I’ll start out by saying Thanos, even though he’s not a character that had a huge preexisting story in the Marvel universe. He was a threat, but he was not developed in any way up to this point. Thanos has an incredible amount of screen time in this film, in a lot of ways I would say it’s his movie. Our job when we make these films – and what we feel is important to us – is to surprise the audience. We wanted to tell a story that they weren’t expecting, and the story is told from the point of view of a villain, which I think is also really unique and risky for a commercial film that will surprise the audience. I think this is a market where the audience really enjoys innovation and disruption, and we want to do something innovative in this space. So I think Thanos has an incredible amount of screen time, and I think you’ll find that Thor has a really interesting arc in the film. He hasn’t been at the forefront of other Avengers movies, but he certainly has a very important role in this film. So I’ll say, Thanos and Thor.”

As amazing as the new trailer was, it left many fans with two big questions. Where are Ant Man and Hawkeye? We know that the pair are due to appear in the upcoming and as of yet untitled Avengers 4 but their whereabouts and role in Infinity War is still murky.

We have at least somewhat of an answer to one of those characters. When asked about Clint Barton’s (Hawkeye) whereabouts in Infinity War during an interview with /Film Joe Russo revealed:
“Coming out of Civil War, he’s in the same position that Cap and Falcon are at the end of that movie. And Ant-Man. Coming into this movie, you know… Characters on Cap’s side coming out of the Civil War, some made certain decisions and others made other decisions that led to different paths in them dealing with oversight in this movie in a different way. So Hawkeye’s on his own journey in this movie.”

More news will no doubt drop as we draw closer to the release of Infinity War in cinemas. Until then make sure you follow @WeAreNiche and keep coming back to the website as we bring you the latest.