We’re going through something of a lull in regards to Star Wars novels being on the horizon, so to fill the void here are 5 novels set in the Star Wars universe that we want to see in the not too distant future 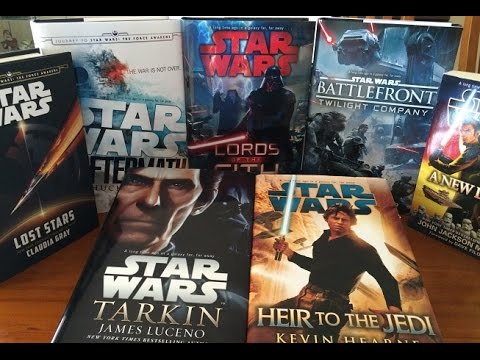 We’ve already had one novel focusing on Dave Filoni’s star creation, but it’s safe to say that E.K Johnston didn’t hit the heights with that novel that many people had hoped he would. It was a solid entry into the Star Wars collection, but it was nothing special.

With the character of Ahsoka being so beloved by fans and with Star Wars Rebels now opening up a 4 year time frame in which the character is hiding somewhere in the Galaxy, waiting for her chance to come back into the fold, a novel would be the perfect way to bridge that gap.

I imagine that a Luke Skywalker novel set between the events of The Return of the Jedi and The Force Awakens would be on any Star Wars fans’ list of most wanted novels. The time frame has yet to be explored in any serious detail, and whilst that may be expanded on in whatever the next animated and live actions series cover I doubt the stories of Luke Skywalker will be touched on much, if at all.

Not only would Luke’s adventures for Jedi artifacts make for an enjoyable base story for  a novel, but the involvement of Ben Solo would also allow for their relationship to be given some much needed expansion.

A young adult novel about the young Queen of Naboo has been rumoured for a while now, but we’ve never received anything official in regards to a release date.

Exploring the politics, people and creatures of Naboo would certainly be something that would excite many fans, particularly those who grew up around the prequel movies. What’s more is that the novel Lost Stars has already proven that when done right young adult novels in the Star Wars universe can be smash hits. Get Claudia Grey in to write this novel and give it to us asap.

At this stage this story feels like one that is born out of necessity rather than want. This entry is a slight cheat as the story or unveiling of Snoke’s past could quite easily be slotted into either the Luke Skywalker novel or indeed our final entry on this list. But regardless of where it comes, fan anticipation needs to be quenched and Snoke needs to reappear in Star Wars canon.

It’s obvious now that Snoke won’t come back to life in Episode 9 and whilst that will no doubt disappoint many fans, the large majority who poured through the internet looking for clues about who Snoke is and where he might have come from in the lead up to The Last Jedi, will no doubt be satisfied.

The woman who arguably prevented the Empire from falling apart long before the Battle of Jakku and the only character who we have seen grow from child to adult throughout multiple mediums of Star Wars canon. Yet somehow the woman who could have become Empress, the Imperial Grand Admiral, Rae Sloane, still hasn’t had her own novel.

Much like Ahsoka, Sloane is one of those extended canon characters that the fan base has grown to love and have emotionally invested themselves in. A continuation of her story after the Battle of Jakku would not only give us some much needed insight into the creation of the First Order, but it would also give us the desired conclusion to her story.