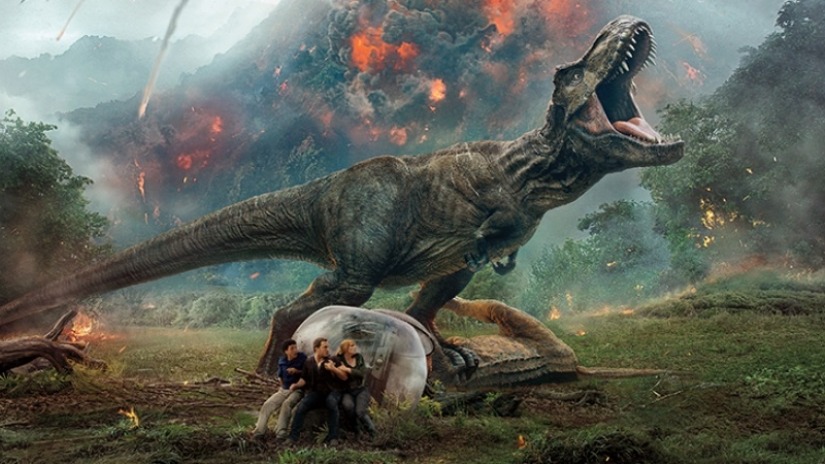 I know it’s cliched but Jurassic World: Fallen Kingdom really is a film of two halves, and surprisingly the half I preferred was not the one I thought I would going in.

It’s obvious now that Fallen Kingdom really isn’t a Jurassic Park sequel. We need to start treating Jurassic World as the start of a entirely new franchise, because besides recurring characters and occasional homages there is very little of that original “Jurassic Park feeling” left to be found. That’s not necessarily a bad thing though, what we’ve been left with is a monster movie series which makes the most of a wide array of dinosaurs, and at times has the capability to wow audiences with moments that nearly reach the heights of the Steven Spielberg masterpiece from 1993.

Without going into any spoilers Fallen Kingdom splits the film between a set piece on Isla Nublar and a secondary set piece set on the mainland. Both halves (I think it was slightly more weighted towards the mainland in actuality) have vastly different tones and emotional pulls. The result works out well, with the fast-paced and nostalgic rush of the first half being swiftly replaced by a tense and survival horror-esque blend in the second. A switch in tone which is handled about as well as such a change could be by director J.A Boyana.

That isn’t to say it doesn’t cause issues though. It’s the second half of the film which really doesn’t feel like a Jurassic Park movie anymore, instead it’s very much a Jurassic World sequel and whilst I understand and respect that, I still feel as though the vibes felt in the original two (heck even three) movies felt more realistic and believable than anything in films “four” and “five”.

The largest criticism I have isn’t even of the film itself, instead its a critique of the trailers and general marketing surrounding the film. Never before have I seen trailers which spoiled so much of a movie. Much like The Amazing Spiderman 2 some of the very last shots of the movie are shown in the trailers and key emotional moments are ruined because you know that there are key shots from trailers which are yet to happen. It’s a real shame because I felt as though it really detracted from my enjoyment of the film and it’s a pandemic in Hollywood which needs to stop.

The acting was throughout was fine. The standout was probably Daniella Pineda who played a character called Zia Rodriguez who is part of the Dinosaur Protection Group. Likewise the plot itself was fine, it was a solid and logical continuation of Jurassic World and whilst the villain’s were a bit cartoony they served their purpose well.

I feel like I’ve been more down on the movie than I wanted to be. I really did enjoy it and whilst it was flawed and in my opinion could have had a stronger second half, I would definitely go back and watch it again without much hesitation. The score was great, as always seems to be the case with this franchise, and despite all my reservations about these films not feeling like the Jurassic Park of old, I can’t say that about the opening scene. I’m sure you’ve heard by now, but the opening sequence in this movie is some of the best stuff since the first two movies. It features some of the best cinematography (I recurring positive for Fallen Kingdom which has some beautifully composed shots) I have seen in a Jurassic World or Park film and deserves all the credit in the world.

Overall it was a solid sequel which deserves to be seen in the cinema. I’m not sure I like where the third film appears to be going, but hopefully something can be pulled out of the bag to finish the trilogy off strong.

Public Service Announcements – If you haven’t already then see this movie before you watch and trailers. They really do detract from the enjoyment. Secondly, do not stay behind for the post-credits scene, it’s really not worth it on any level.